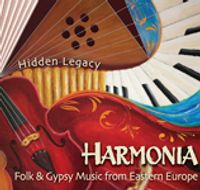 Harmonia presents the traditional folk music of eastern Europe, ranging from the Danube to the Carpathians. Its repertoire reflects the cultures of this region: Hungarian, Slovak, Ukrainian, Romanian, Croatian and Gypsy. Performing on authentic folk instruments, and styled after turn of the century East-European Gypsy bands, their music is drawn from both the urban and rural traditions of Eastern-Europe. The ensemble's performances evoke the full range of human emotions; interspersing fiery, passionate virtuosity with soulful melancholy and nostalgic yearning. They have been called "obscenely talented" by the Folklore society of Washington D.C. and "a musical gem" by National Public Radio. The musicians come from varied East-European backgrounds; in Harmonia they have found a common musical language. Harmonia brings to the concert stage the vitality and excitement of ethnic weddings, celebrations, and smoky cafés that inspired composers such as Bartok, Brahms and Lizst. Whether performing in these traditional settings or in concert halls, Harmonia's members stay close to their roots.

The six-piece ensemble uses instruments as varied as accordion, upright bass, violin, panflute, and cimbalom (the East-European 125 string hammered dulcimer).  Capturing the emotion, depth, fire and passion of Eastern Europe; Harmonia’s rhythms move in a heartbeat from mellow and dissonant to loud and frenzied.  The musicians come from varied East-European backgrounds, finding a common musical language in Harmonia.  Their technical brilliance only adds to Harmonia’s breathtaking performances – dizzying cimbalom solos coupled with soaring violin lines, haunting flute and accordion solos and soulful vocals - are a joy by any standard.  In addition to being polished performers, Harmonia’s members are adept at explaining their music and culture – the ensemble is equally at home on the concert stage and in academic or workshop settings.