"The pinnacle of style and sophistication, the members of Khevrisa are among the leading performers of traditional Klezmer music in the world today. Four virtuoso musical icons form Khevrisa, the secret Ashkenazic term for a klezmer ensemble: violinist Steven Greenman; Walter Zev Feldman on cimbal; Michael Alpert on sekund violin and vocals; and Stuart Brotman on bass. These amazing players promise a musically exhilarating night of traditional Klezmer music. Their technically brilliant playing is mesmerizing, the result of superb research and inspired performing by some of the founding musicians of the Klezmer revival." 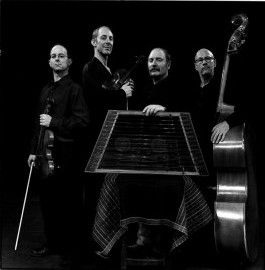 A Description by Walter Zev Feldman

Khevrisa was the secret klezmer term for the klezmer ensemble, known otherwise as "kapelye". It is used here to refer to the old European kapelye consisting of four instruments with discrete musical functions-the lead fiddle (prima/labushnik), the kontra fiddle (sekund), the cimbal (hackbreydl) and the bass. The standard khevrisa, originating in Central Europe, was developed by the klezmorim of Poland-Lithuania during the 17th century and continued as the core klezmer group there until the early 20th century-in some regions up to the Holocaust.

European klezmer music differed from the American variety in its instrumentation, performance style and in the nature of the repertoire. In Eastern Europe the klezmorim were a closed professional caste, and the kappelmeister violinists were a major source of music both for the local aristocracy and for the Jews. In Poland/Lithuania/Ukraine this required a knowledge of some Western art music and in Romania of Turkish art and popular music. While in most of Eastern Europe the klezmorim performed only with Jewish personnel, in Romania they mixed with Rom (Gypsy) and Greek musicians, frequently touring together in the Balkans and Istanbul. The most famous klezmorim were retained by the Romanian boyar aristocracy and the Ottoman voyvod governors. During the 18th and 19th centuries these Ashkenazic, eastern and western elements were combined by the klezmorim to create a unique repertoire and performance style. In addition to performing the functional music for Jewish ceremonies and lighter standard classical pieces, the best klezmer composers created small-scale compositions for their wealthier Jewish patrons-tunes known as zogekhts, shteyger, taksim, dobriden, dobranoch, mazltov, terkisher freylakhs, skochne, and settings for various psalms and religious texts. In Hasidic areas klezmorim composed table-tunes, known as tish-nign. Elaborate dance tunes were composed for listening or for the performances of professional klezmer solo dancers. At the same time the best khevrisas were masters of dance music, creating dynamic polyrhythmic patterns to accompany the melody of the lead violin.

Most of the famous klezmorim of Eastern Europe did not emigrate to America and were never recorded, but a few precious pre-World War I sound recordings document their performance-style on violin, flute and cimbal. A number of notated collections, especially those of Moshe Beregovski (Kiev) and Moshe Bik (Orhei, Bessarabia) preserve some of the rare compositions of the 19th century klezmer masters. Our interpretation of these pieces is aided by the presence of Mr. Jeremiah Hescheles, (born 1910 in Lvov province), the last European-born kappelmeister in North America. These notations and recordings form the basis for the performances of "Khevrisa."

Khevrisa performs the music of the European Jewish wedding, traditionally the major venue for klezmer music. Whereas in America Jewish wedding music preserved only the dance music tradition, in Eastern Europe the wedding was a multi-day event shifting in mood from meditative introspection to ecstatic celebration. The entire event was presided over by the wedding-jester, known as badkhn, who worked closely with the musicians to guide the emotions of the participants. Rediscovering the music of the European Jewish wedding has involved years of research with living informants, pre-Holocaust European recordings and notations. Of all the klezmer ensembles today, only Khevrisa performs the music of the European Jewish wedding with its original instrumentation and with the interaction of badkhn and klezmer. The group's recent concert in Krakow, Poland (June 25th, 2002) constituted the first complete performance of this repertoire in Poland since before the Second World War

Khevrisa's performance begins with the somber music of the bride's farewell to her family held on the Sabbath before her wedding. The morning of the wedding is signaled by the eerie sounds of the dobriden, the welcoming tune, echoing through the streets of the little town. Each of the honored guests are greeted by slow and dignified melodies knwn as mazltov. the most dramatic moment of the wedding proper is the kale-bazetsn, where the badkhn poignantly describes the bride's transition from single to married life, while the klezmorim improvise around his singing. Khevrisa's performance of this section of the wedding comes from the Polish town of Gliniany via the memory of Jeremiah Hescheles, as well as early recordings from Ukraine. Bride and groom are escorted to the wedding canopy (khupe) to music newly composed by Steven Greenman in the style of Transcarpathian wedding marches. After Michael Alpert performs the traditional cantorial blessing of the couple, the family dances their way back from the canopy. The wedding feast begins with ritual dances for each pair of in-laws, followed by solo dance performances by the most honored guests. Then general dancing ensues, emphasizing the old contra-dance known as sher. After the dancing the klezmorim approach the table of the parents of the couple and serenade them with special compositions. Later in the night, dances are played for the kitchen staff, and finally the badkhn sings the good night (gute nakht) song to close the wedding. The klezmorim follow the in-laws home with special tunes for the street (gas-nign) while the whole town looks on, standing in front of their doors as the sun rises.